The one stop shop for all your pharmacy, travel health and vaccination requirements.

Get in touch with us

Send us an e-mail

We provide chickenpox vaccination for individuals from 9 months of age (children & adults).  See the package leaflet of the vaccine we use (information for the user) here.

Cost: £70 per dose inclusive (i.e. there is no consultation fees); the full course requires two doses.

Chickenpox vaccine may be given at the same time or at any time before or after other vaccines. However, if chickenpox and MMR vaccines are not administered on the same day, then a ONE month minimum interval period should be observed.  For more information see below under scheduling.

To arrange a home visit email your post code to: info@hhpharmacy.co.uk

Please bring records of any past vaccinations you have received and/or the personal child health record (Red Book) to your appointment.

Chickenpox is an acute disease, predominantly occurring in childhood.

It is caused by varicella-zoster virus and is characterised by a vesicular rash, and often fever and malaise.

Up to 90% of susceptible contacts (e.g. non immune household contacts) develop the disease.

How is chickenpox transmitted and for how long is an infected person contagious?

Transmission is by personal contact or droplet spread, with an incubation of 1–3 weeks (i.e. time from infection to symptoms appearing).

Chickenpox is infectious from 1–2 days before the rash appears until the vesicles are dry or have crusted over, usually about 5 days after the onset of the rash.

How serious a disease is chickenpox?

Chickenpox is usually a self-limiting disease in healthy children.

If serious complications (such as pneumonia, encephalitis, or dehydration) are suspected, admission to hospital should be arranged. 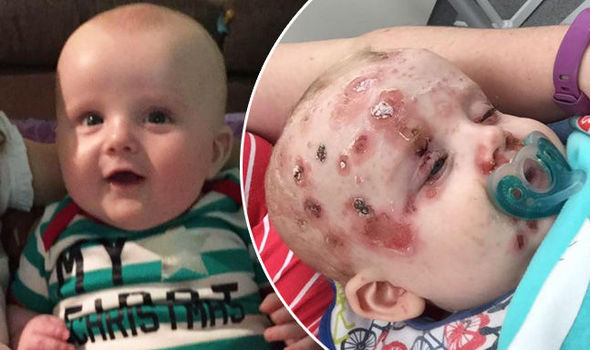 Scarlet fever is caused by bacteria which are spread when the person’s mouth, throat, or nose comes into contact with infected saliva or mucus (which may be present on cups, utensils, and surfaces), or by aerosol transmission. Outbreaks in schools or other institutions sometimes occur.  Scarlet fever most commonly affects children of school age, peaking at 4 years of age.

According to the guidance from Public Health England, chickenpox (varicella) is the most common risk factor for infections such scarlet fever and tonsillitis in children.  In other words, those who have had chickenpox recently are more likely to develop a more serious infection during an outbreak of scarlet fever, therefore, parents should remain vigilant for symptoms, such as, persistent high fever, cellulitis – a skin infection – and arthritis.

The trusted Patient website also states that the recent outbreak of scarlet fever has sometimes occurred in childcare settings where there is also an outbreak of chickenpox. If you have a child who has recently had chickenpox and then gets scarlet fever you need to watch out for signs of serious infection. These may include joint pains, high temperature (fever) and persistent skin infection.

The success of the U.S. chickenpox vaccination programme

If chickenpox is co-circulating with scarlet fever in a nursery or pre-school setting, chickenpox vaccination is recommended for children and staff with no clear history of chickenpox.  Chickenpox vaccine administered within three days of exposure may be effective in preventing chickenpox. 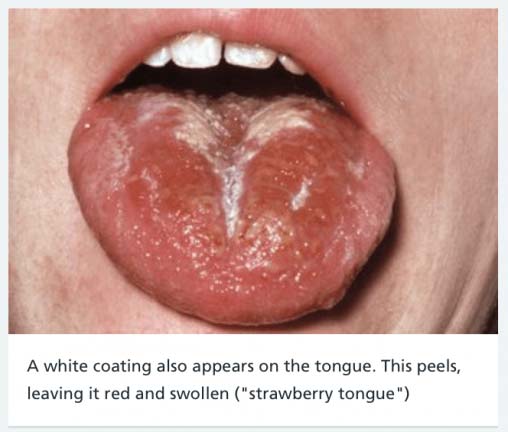 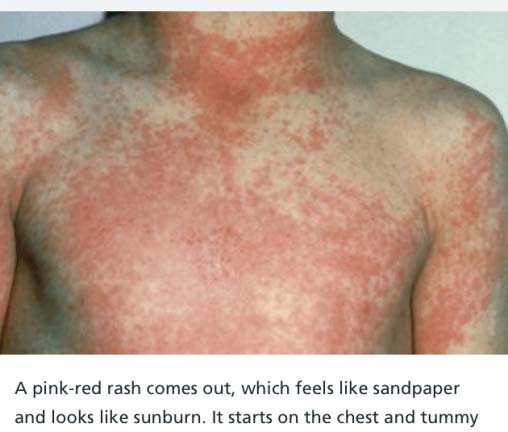 “Typical scarlet fever rash” – Children who have had chickenpox recently are more likely to develop more serious infection during an outbreak of scarlet fever and so parents should remain vigilant for symptoms such as a persistent high fever, cellulitis (skin infection) and arthritis (joint pain and swelling). If you are concerned, seek medical assistance immediately.

How protective is the vaccine?

For those who are vaccinated but still get chickenpox, the symptoms will generally be milder.

Available information suggests that chickenpox immunisation may reduce the risk of developing shingles later in life in comparison with those who had wild-type disease.

How long does vaccine protection last?

Protection after two doses of vaccine appears to be very long for most people immunised, however, it is not known if it is lifelong at this stage. Countries that have been using the vaccine for a long time have not identified a need for booster doses.

What are the vaccine recommendations?

Vaccination policies vary worldwide, ‪chickenpox‬ vaccine is NOT part of the NHS routine immunisation schedule, but it is in Finland, Germany, Greece, Italy, Latvia, Luxembourg, Spain, Australia, USA and Canada.
Those travelling for education/employment to the US or Canada maybe asked for proof of vaccination or immunity as the vaccine is used routinely in their national vaccination schedule. Further information on requirements is available from Centres for Disease Control and Prevention. Travellers Health – Yellow Book: Varicella (Chickenpox)

The chickenpox vaccine is currently only offered on the NHS to people who are in close contact with someone who is particularly vulnerable to chickenpox or its complications.

Can the chickenpox vaccine be used in post-exposure settings? How soon after exposure does the vaccine need to be administered?

If you have not had chickenpox and are exposed to someone with this disease or shingles, the chickenpox vaccine can be given up to 5 days (ideally within 3 days) after exposure to prevent the disease or making it less serious.  This can also protect you from chickenpox if you are exposed again in the future.

Who is at risk of chickenpox?

Why not let my child get chickenpox naturally and build natural immunity?

1) Chickenpox can be a mild disease, but it isn’t always. There’s no way to know who will have a mild case and who will become very sick. When your child gets his or her chickenpox vaccine, he or she is getting immunity from chickenpox without the risk of serious complications of the disease. Adults, pregnant women, neonates, and immunocompromised people are more susceptible to serious complications.

2) Prevents your child from feeling itchy and uncomfortable from chickenpox

3) Keeps your child from missing school or childcare (and keeps you from missing work to care for your sick child).

4) The majority of UK born adult travellers will be immune, but those travelling with non immune children should be aware of the potential for infection to occur whilst overseas.

If a child has a very mild case of chickenpox (for example, only 5 to 10 pox), is s/he immune or should s/he be vaccinated?

A mild case of chickenpox produces immunity to chickenpox as does a moderate or severe case. A child with a reliable history of chickenpox does not need to receive chickenpox vaccine. However, if there is any doubt that the mild illness really was chickenpox, it is best to vaccinate the child. There is no harm in vaccinating a child who is already immune.

This vaccine can be given to both adults and childern from the age of 9 months (used to be from 12 months of age prior to Sep 2017).

Children 9 months up to and including 12 years

2 doses should be given to ensure optimal protection against varicella.

The 2nd dose should be given after a minimum interval of 3 months.

The 2nd dose should be given after an interval of at least 6 weeks but in no circumstances less than 4 weeks.

This vaccine should not be administered to children aged less than 9 months.

Adolescents and adults from 13 years of age and above

2 doses. It is preferable to administer the second dose at least 6 weeks after the first dose but in no circumstances less than 4 weeks.

Chickenpox vaccine may be given at the same time or at any time before or after other vaccines. However, if chickenpox and MMR vaccines are not administered on the same day, then a ONE month minimum interval period should be observed.

This is based on a study in the US (Mullooley & Black, 2001) which showed a significant increase in breakthrough infections when varicella vaccine was administered within 30 days of MMR vaccine; suggesting that MMR vaccine caused an attenuation of the response to varicella vaccine. When the vaccines are given on the same day, however, the responses have been shown to be adequate (Plotkin, Orenstein & Offit, 2013.).

Where protection from either vaccine is required rapidly then the vaccines can be given at any interval and an additional dose of the vaccine given second should be considered.

How safe is varicella vaccine?

About 20% of vaccine recipients will have minor injection site complaints, such as pain, swelling, or redness.

Women who are pregnant should NOT receive the chickenpox vaccine and pregnancy should be avoided for one month following the last dose.

Studies have shown that the vaccine virus is not transferred to the infant through breast milk and therefore breast-feeding women can be vaccinated if indicated.

Is there any concern when giving chickepox vaccine to a child who lives with a susceptible pregnant woman or an immunocompromised individual?

If a person develops a rash after receiving chickenpox vaccination, does he need to be isolated from susceptible people who are either pregnant or immunosuppressed?

Transmission of chickenpox vaccine virus is rare. However, if a pregnant or immunosuppressed household contact of a vaccinated person is known to be susceptible to chickenpox, and if the vaccinee develops a rash 7 to 21 days following vaccination, it is prudent that they avoid prolonged close contact with the susceptible person until the rash resolves. 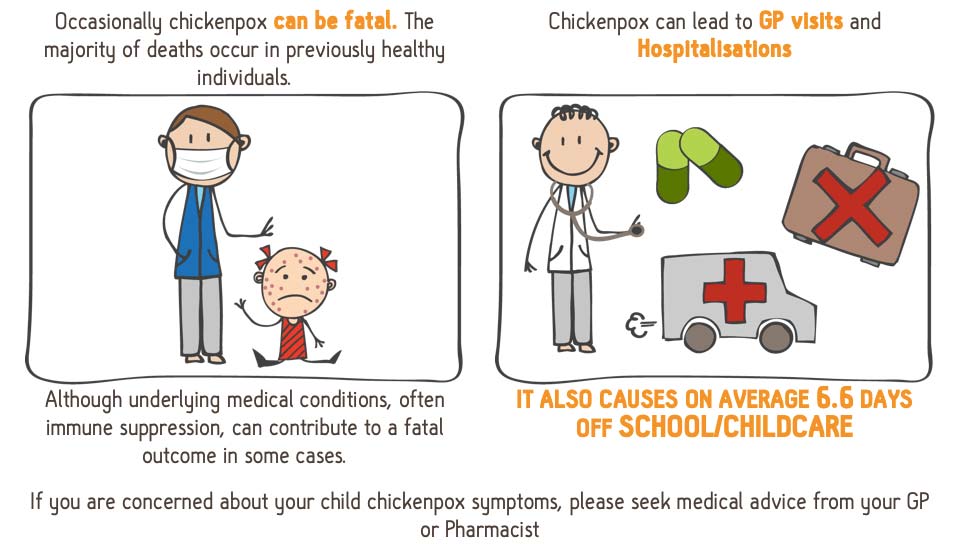 No products in the cart.

This website uses cookies to improve your experience while you navigate through the website. Out of these, the cookies that are categorized as necessary are stored on your browser as they are essential for the working of basic functionalities of the website. We also use third-party cookies that help us analyze and understand how you use this website. These cookies will be stored in your browser only with your consent. You also have the option to opt-out of these cookies. But opting out of some of these cookies may affect your browsing experience.
Necessary Always Enabled
Necessary cookies are absolutely essential for the website to function properly. These cookies ensure basic functionalities and security features of the website, anonymously.
Functional
Functional cookies help to perform certain functionalities like sharing the content of the website on social media platforms, collect feedbacks, and other third-party features.
Performance
Performance cookies are used to understand and analyze the key performance indexes of the website which helps in delivering a better user experience for the visitors.
Analytics
Analytical cookies are used to understand how visitors interact with the website. These cookies help provide information on metrics the number of visitors, bounce rate, traffic source, etc.
Advertisement
Advertisement cookies are used to provide visitors with relevant ads and marketing campaigns. These cookies track visitors across websites and collect information to provide customized ads.
Others
Other uncategorized cookies are those that are being analyzed and have not been classified into a category as yet.
SAVE & ACCEPT